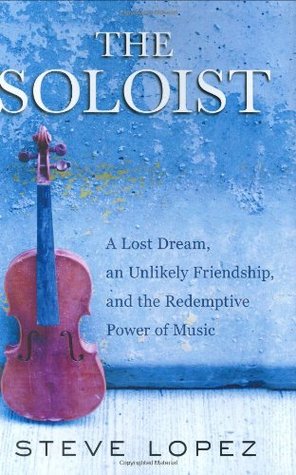 Summary:
When Steve Lopez sees Nathaniel Ayers playing his heart out on a two-string violin on Los Angeles’ Skid Row, he finds it impossible to walk away. At first, he is drawn by the opportunity to crank out another column for the Los Angeles Times, just one more item on an ever-growing to-do list: “Violin Man.”

But what Lopez begins to unearth about the mysterious street musician leaves an indelible impression.” “More than thirty years earlier, Ayers had been a promising classical bass student at Juilliard – ambitious, charming, and one of the few African-Americans – until he gradually lost his ability to function, overcome by a mental breakdown. When Lopez finds him, Ayers is alone, suspicious of everyone, and deeply troubled, but glimmers of that brilliance are still there.”

From an impromptu concert of Beethoven’s Eighth in the Second Street tunnel to a performance of Bach’s Unaccompanied Cello Suites on Skid Row, the two men learn to communicate through Ayers’s music.

Review:
This is a really powerful look into the mental health issues rampant among the homeless, not to mention the day-to-day problems those homeless face. How they’ve become invisible to society unless they possess some hidden talent, because being human just isn’t enough anymore.

I found myself liking the interviewer less and less. He was always trying to make a story off of Nathaniel, and though we’re given glimpses of times Steve acknowledges he’s helping a human, it always seems that Nathaniel is a performer or musician before all else. And it is those qualities that make Steve persevere through Nathaniel’s mental illness episodes. Just a haunting and raw read.